After more than 500 years of family ownership of the property, this era has come to an end and into someone else’s hands now. As a child and teenager, I had already tried with the parents to then difficult post-war period to Bewätligung the tasks. In the first half of the last century it was a small guest house with 2 rooms, without room / hotel industry, with attached small-scale farming as a survival factor this time. Thus, a small side business for full time my father worked as an external employee for a large paper mill and therefore constantly away from home. As a war veteran, he was at that time mourner. In 1973 I took over the business and expanded it in small steps, but continuously until 2010 but a handsome business on that in a GesmbH. 1991 in 100% of sole ownership changed. Until the 29.04.2013 remained so. Since April 2010, I must refer the Age Pension and was responsible since then to reputable and sought long-term employees. A 2010 achieved status, I have enjoyed so far on the one hand, on the other hand, however, still meant responsibility with care and dedication.

On 30.04.2013, the sale of Josef Danzer GesmbH was. sealed in the notary Grein. Next remained in the possession of the Apartment House until 2004, built in 2002 with the park area located all around.

Since the 15th century there this historic building. It was originally a hunting lodge for the aristocracy.
The ever-developing stronger trade over the Schiffstransportweg on the Danube was honored by the award of Schiffsmeisterei. This guild brought a regional employment supply and it required the construction of another floor in the 17th century. The coped with draft horses and oxen task of ship trains enabled as a result also the horse-changing station for stagecoaches. In turn, the supply of ride-traveler was logical. 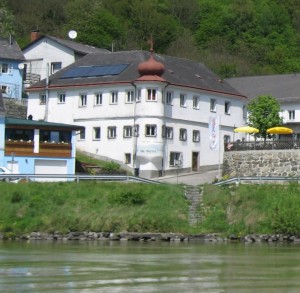 In the 1900s they were able to cope with increased steam engines this route through the Strudengau independently. Since then, the house filled the task of an inn until 1973. From this time the house was changed to a condominium in a number of modifications.

1972 wanted and I had to convince them with innovations and investments comply with future-oriented planning developments and make standard optimizations my parents. Each plan positionally was necessary to make the investment sums manageable and redeemable. Thus, self-planning was given and tampering in all areas. In the lower rooms was then positioned Agriculture with 1 to 3 cows, pigs and some chickens to 6. A number of storage and work areas (wood, coke, hay, fruits and vegetables), and 3 garages. On the upper floor the large-scale storage of hay and straw was made. On the right side of the building 2 apartments were built with former luxury of cold running water in the postwar period.

From some considerations about the company’s strategy and planned pension and I realized 2002-2004 an inlet and reconstruction with an additional 3 garages, magazine, workshop, heating and 9 apartments as an apartment object.

The sale of Josef Danzer GesmbH. proved more difficult than expected due to the size. The primary interest lay at the hotel project, therefore, a private purchase of an apartment house on my part headed.

The solutions to this life’s work were not the only commitment of my business life, but very much enriched the time and let them pass in a flash:
about 30 years, I headed Wifi in Linz and district offices WKOÖ training seminars for the hospitality industry.
From 1973 to the period of about 25 years preparatory courses for the license exam
at the same time I was allowed in the WKOÖ the Section hospitality and tourism Following involved in the Section
represented in: Chairperson at final examinations in Wifi
Presided at teaching instructor exams in the LaReg.OÖ.
Member of the Board of Examiners of LaReg.OÖ. for the licensed hospitality and hotel industry in the period of 25 years,
Member of the Commission of the hotel classification WKOÖ
only short was the commitment in the council of St. Nikola. Personally differing views and lack of business strategies let me use my time for other subjects.

From my mother I received musical aptitude and the urge for active music and singing. Initial experience with live music I made a hobby during my studies in Krems. After returning home and corporate commitment stagnated this. The time constant expectant events in the hotel operation brought the need for commitment of various music groups. Fortunately, arose spontaneously a small local band “Evergreens” was called, but had no singer. The more frequently asked question to me was to be seen as a request. For my part, it was not possible to comply with all obligations and so I limited myself primarily to the domestic events. Nevertheless, in the cooperative team spirit occasional external exposures were possible and necessary.
The best time in recording our first audio cassette, our favorite is deceased on the Hawaiian guitar, bass, etc. after a short suffering. Fond memories of this 1.Tonträger is the heart of my musical career. How this is so, now reduced from 4 to 3 persons, our thirst was but slowed down a bit. A commitment to the
NEC Hall in Birmingham in the UK (then the largest in Europe Hall) was an experience of a special kind. The professional and personal moving away from the place has gone St.Nikola us on drums another colleague lost. Just the technology at this time brought with automation and thus learning the submission to the rhythm default.
A short stop was the result. However, the operational situation required the continuation of the musical engagements for various occasions such as: musical evening for hotel groups, Nicholas wreath, every New Year’s Eve … From the contacts of the early days of my management supported me in consequence further a music teacher for this task and took me about 15 years. Age was the reason for the termination of our musical community. With new technology, new equipment and recovered confidence I have the last 12 years, the music for my guests and friends alone denied. Also, this commitment is to delivery the hotel operation history.

My complete system with 2 mixers and several keyboards, electric guitar 1, 2 mixing amplifier and bass cubes, and much material to I submit to interested parties.

What remains is to me the further aim of the treatment and care of the apartment building. The age compels me now respect from the insight itself also to be consumers and to make the evening of life to your heart’s desire and live.
This is provided to the apartments apartments for rent on time. Still Solang Apartments are freely available, I intend maximum number of 3 apartment with a maximum of 10 beds to certain seasonal events organized as part of the domestic subsidiary rights for rent. You are welcome to it!